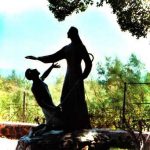 The test of love is a searching of the heart.

Soon after his resurrection Jesus this question to Peter, “Do you truly love me more than these?” (John 21:15). Such had been Peter’s proud boast earlier (see Mark 14:29); but now the setting in which he found himself would surely have reminded him of his later denial:

How thoroughly we see Jesus searching Peter’s heart! It is the same kind of heart-searching of which the psalmist speaks in Psalm 139 where says that God knows him when he sits down or gets up, goes out or lies down, what he is thinking and what he is going to say before he says it.

Jesus’ question to Peter uses a significant word for ‘love’ (‘agapeo’). It is the usual word for love in the New Testament, with a special quality about it. It is used of God’s love for it emanates from the heart and nature of the lover, regardless of the state of the one loved.  It loves no matter what, totally and unreservedly. Jesus asks Peter if he loves him like that.

In Peter’s answer a different word is used, a word that describes love between brothers (‘phileo’). Some scholars argue that there is no distinction to be made between the two words, but I prefer to see Peter’s response as implying that he loves Jesus but is not prepared to be so rash in is claims as he has been in the past.

With the third question, however, Jesus comes down, as it were, to Peter’s level; he now uses Peter’s own word, the somewhat weaker word, phileo.  Understandably, Peter is hurt by this. Is Jesus now questioning even his affection for him?  It could not have been a comfortable experience for Peter, but after his cowardly denial his love had to be subjected to a test. And if we are going to avoid making, or failing to live up to, rash claims of discipleship, then our love also has to undergo such a test.  Peter has learned his lesson. He is no longer relying upon his own estimation of his heart, he surrenders to the fact that Jesus knows him through and through and still has time for him. “Lord, you know all things; you know that I love you”.

With each question and each response there came a commissioning: ‘feed my lambs, take care of my sheep, feed my sheep’. The Lord knows our weaknesses, that we make bold claims that we cannot sustain, that we do our best in this matter of discipleship even if that falls short of what it could be, that our total love is, as often as not, more like fondness.  But he still has a place for us in his service.  He did not dismiss Peter as a failure, he tested then re-commissioned him as a follower.  And he still does that!

The Lord cannot bless the proud, false claims of love and loyalty which will, sooner or later, become apparent for what they are. But he can and will bless the humble acknowledgement of weakness and the humble appeal for grace.

There are at least two occasions in the Bible where we find a combination of divine sovereignty and human responsibility.  A classic example of this is in Genesis 50 where Joseph’s brothers, conscience-stricken by their earlier cruel treatment of him beg for forgiveness.  They are fearful that Joseph, now in a position of great power, will want to get his revenge on them.  Joseph’s response is a wonderful example of grace and a recognition of God’s sovereign purposes.  “You intended to harm me”, he says, “but God intended it for good to accomplish what is now being done, the saving of many lives”.

We find a supreme example of divine sovereignty and human responsibility in Peter’s words on the day of Pentecost.  Acts 2:23 “This man was handed over to you by God’s set purpose and knowledge (divine sovereignty); and you, with the help of wicked men, put him to death (human responsibility)…”   But, as in the case of Joseph, God’s intention was far-reaching: “But God raised him from the dead…”!(v24)!  Yet, those responsible for the death of Christ were not let off the hook, for Peter urges those under conviction of sin (v38) to “Repent and be baptized…so that your sins may be forgiven”.

All this should surely lead us to humble adoration of our wonderful God whose perfection can include our imperfections in his perfect will and plan.  And I think there is a further way in which we can apply this to our daily lives.

Has someone, at some time, hurt or offended you and you still hold a bit of a grudge, even though you have forgiven them or are trying to?  Might it help if, as you pray for them, you make a point of praying for God to bring out of it some particular good to his praise and glory? Or, perhaps someone has cause to hold something against you; you’ve asked and received forgiveness from them, and from the Lord, but still, there is sorrow in your heart over the matter.  Might it help if you asked the Lord to bring good, for his glory, out of even the wrong you may have done?  Or perhaps you are rightly angry about something you’ve heard in the news, or your local community or church.  Then wait on the Lord trusting that, in his gracious sovereignty, he intends it for good.  That would be amazing – but he is an amazing God! 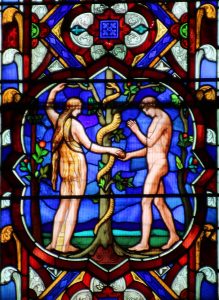 Some years ago a symposium was held in London to consider the great doctrine of penal substitution, the classic view of the atonement that on the cross Jesus bore the wrath of God against sin, for us, as our substitute.  At the time, some had been rejecting that teaching, calling it ‘cosmic child abuse’ and so on.  That is one example among others that have emerged in recent times of it being deemed desirable, by some, to modify or re-interpret understandings of doctrinal and moral teachings that have been held for centuries as being the clear teaching of Scripture.

From time to time we are told by somebody that we’ve got it all wrong, and have done so for most of the past two thousand years!  Sometimes the arguments put forward for these novel notions sound plausible and look attractive, at least to the unwary, and especially if one fails to take into account the whole testimony of Scripture.  What should our reaction be?

It seems to me that there is nothing new in all this.  It goes back beyond the disillusionment arising out of the First World War, back beyond the Enlightenment of the 17th/18th centuries, it precedes the controversies surrounding the Reformation in the 16th century.  It fact, I would suggest it goes right back to the very beginning, to the Garden of Eden and to the doubt-inducing whisper of the serpent to the woman:  “Did God really say…?” (Gen 1:3).  How subtly the serpent twisted the words of God!  God had said: “You are free to eat from any tree in the garden; but you must not eat from the tree of the knowledge of good and evil, for when you eat from it you will certainly die.”  It was all about freedom!  I don’t know how many trees there were in the garden but there was only one that was forbidden!  ‘Eat that one and you’ll die’, so disobedience will hardly bring freedom.  But what was the lie the serpent put forward? “Did God really say, ‘You must not eat from any tree in the garden’?” No! He didn’t say that at all! The serpent falsified the words to sound like a huge prohibition.  Subtly today the devil still likes to suggest that God’s offer of freedom is some kind of imprisonment.

Did God really say:  “God made him who had no sin to be sin for us, so that in him we might become the righteousness of God.”?  Yes, he did!

Did God really say: “My grace is sufficient for you, for my power is made perfect in weakness.”?  Yes, he did!

May you discover even more of what God has really said throughout 2021.